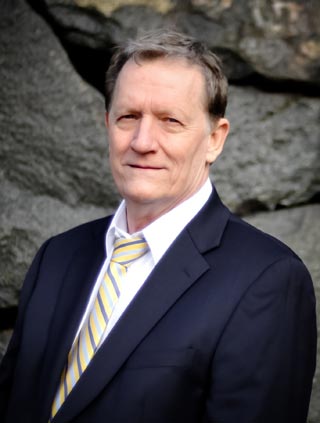 David represents plaintiffs in personal injury cases throughout the State of Washington. He has litigated cases in Kitsap, Pierce, King, Jefferson, Thurston, Mason, Grays Harbor, and Snohomish Counties. He has represented clients from Canada, Spain, Japan and Australia.

Experience counts. David has continuously practiced law since 1980. He relates well to people and is highly regarded by opposing lawyers and judges for his honesty and hard work. He meets clients where it is convenient for them.

David attended 2 years at St. Olaf College in Northfield, Minnesota, and went on to obtain his bachelor’s degree from the University of Nebraska. David graduated from Drake University Law School in Des Moines, Iowa in 1980. During his years of legal education he was accepted as a visiting scholar at the University of Washington and the University of Puget Sound.

“My two favorite things in the practice of law are helping people through a difficult time and taking a case to a jury. The former is deeply gratifying and the latter is just plain fun.”
David Rovang

During his career at the Prosecutor’s office, David prosecuted every level of felony, including violent domestic assaults, vehicular homicide and first-degree murder. His trial work was frequently reported in the local news media. Additionally, David shared duties as an Adjunct Professor at Grays Harbor Community College teaching constitutional law.

In 1987, David opened his own law firm in Port Orchard. For many years, David practiced in diverse areas of law including personal injury law, bankruptcy, real estate law, estate planning, family law, criminal defense and administrative law. The firm grew to a team of five attorneys. David’s practice continued to heavily emphasize trial work. He successfully presented cases of all kinds to many juries over the years, too many to count, but in the hundreds. David now devotes all of his time to representing injured victims of negligent parties.

David grew up on a farm in Nebraska. He moved to the Northwest after law school, drawn by the ocean (there are no oceans in Nebraska). David enjoys sailing, working with wood, and digging razor clams.