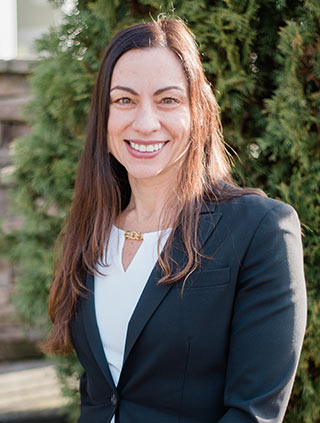 Giovanna grew up on the east coast in the state of New Jersey until attending college at James Madison University in Virginia, where she majored in English with a pre-law concentration.  She then relocated to the Washington, D.C. area and worked in the United States Senate for New Jersey Senator Frank Lautenberg.  There, she worked her way up from an intern to Staff Assistant, then to Assistant to the Chief of Staff, and finally to Executive Assistant.  After working in the Senate for three years, Giovanna attended law school at Tulane in New Orleans.  She was commissioned as an officer in the Navy JAG Corps while still a law student.  As a JAG she worked as a prosecutor and defense attorney in criminal cases, and as the primary attorney for the submarine commanders at Naval Base Kitsap-Bangor.  She has participated in court martial proceedings, administrative separation proceedings, and command investigations.

Upon leaving active duty in 2007, Giovanna was immediately hired by the Kitsap County Prosecutor’s Office, where she served as a Deputy Prosecuting Attorney from 2007 to 2015 handling primarily felony cases.  Then in 2016, she served as a Contract Prosecutor in Pierce County for the cities of Lakewood, University Place, Steilacoom, and Dupont.  Between 2016 and 2019, Giovanna worked as a Final Agency Decision Writer for the U.S. Postal Service, which involved preparing Final Agency Decisions on the merits of employment discrimination complaints.  Since 2019, Giovanna has been serving as a Judge Pro Tempore in Kitsap County, which she finds to be an incredibly rewarding experience.  She also handles social media and special projects for Becker Franklin Rovang, PLLC, and is enjoying learning about personal injury law.

Giovanna is a citizen of both the U.S. and Italy.  She enjoys traveling, strength training, and playing word games.